You can pick up a leaflet with a map and brief guide to the Pinkie Cleugh Battlefield Trail from Fisherrow Library, or from Musselburgh Museum.  The Battle of Pinkie Cleugh Exhibition will be open in Musselburgh Museum, Thursdays to Saturdays, 10:30 to 4 pm, until 29 November.
Or you can  click here to see or print the leaflet on line.
Posted by Frank Waring at 06:18 No comments:

Click here to see the Pinkie Cleugh video, in which Roger Knox relates the story of the battle of 1547, from viewpoints in today's landscape.
The battle exhibition is now open in Musselburgh Museum, Thursday - Saturday, 10:30 am - 4 pm, until 29 November.
Posted by Frank Waring at 14:48 No comments: 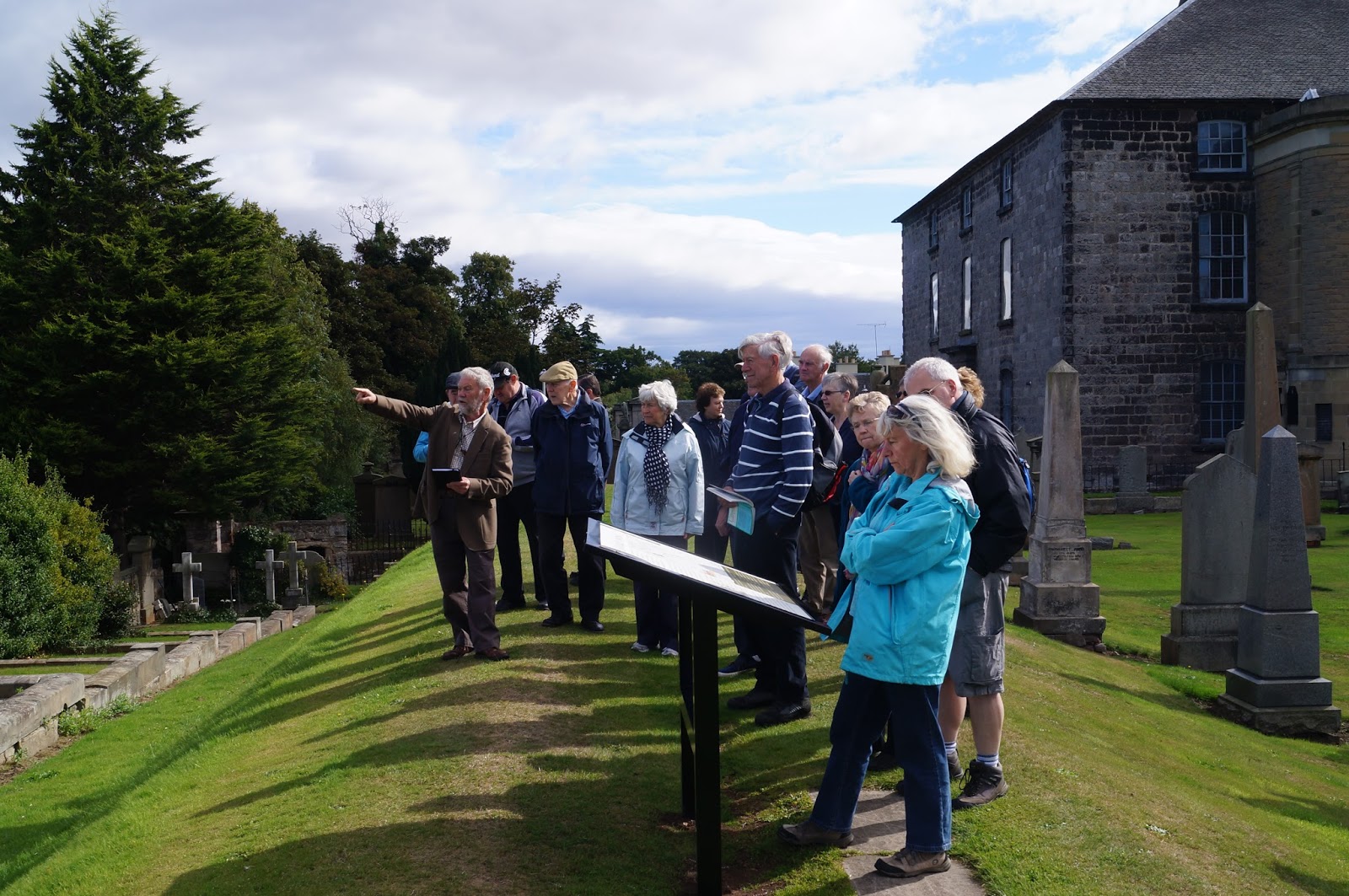 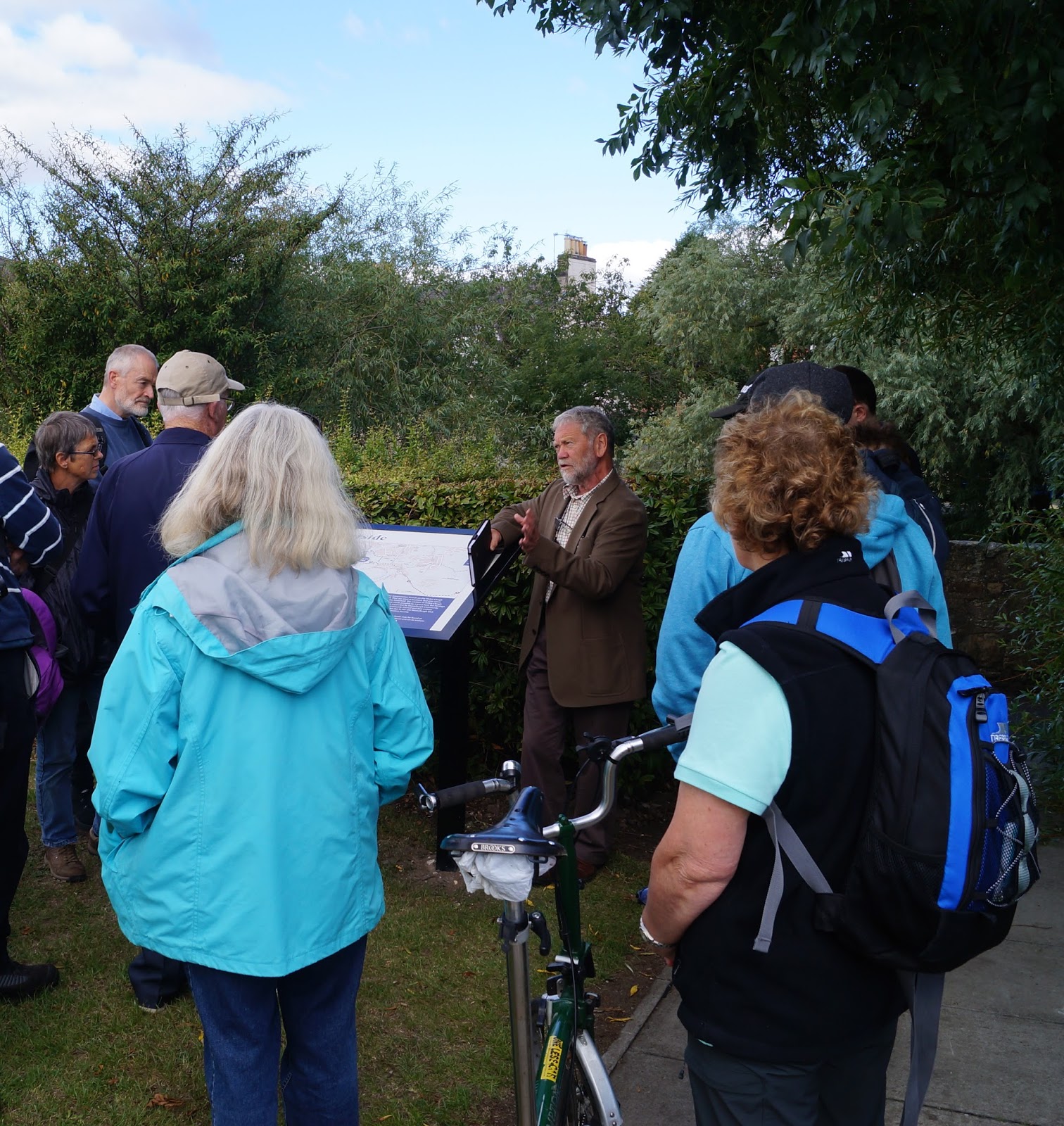 Their walk started at the first location on the Trail, beside the River Esk in Musselburgh, close to the Roman Bridge, and then continued to Inveresk churchyard (first picture, above), the objective that the English hoped to gain on the day of the battle, 10 September 1547. 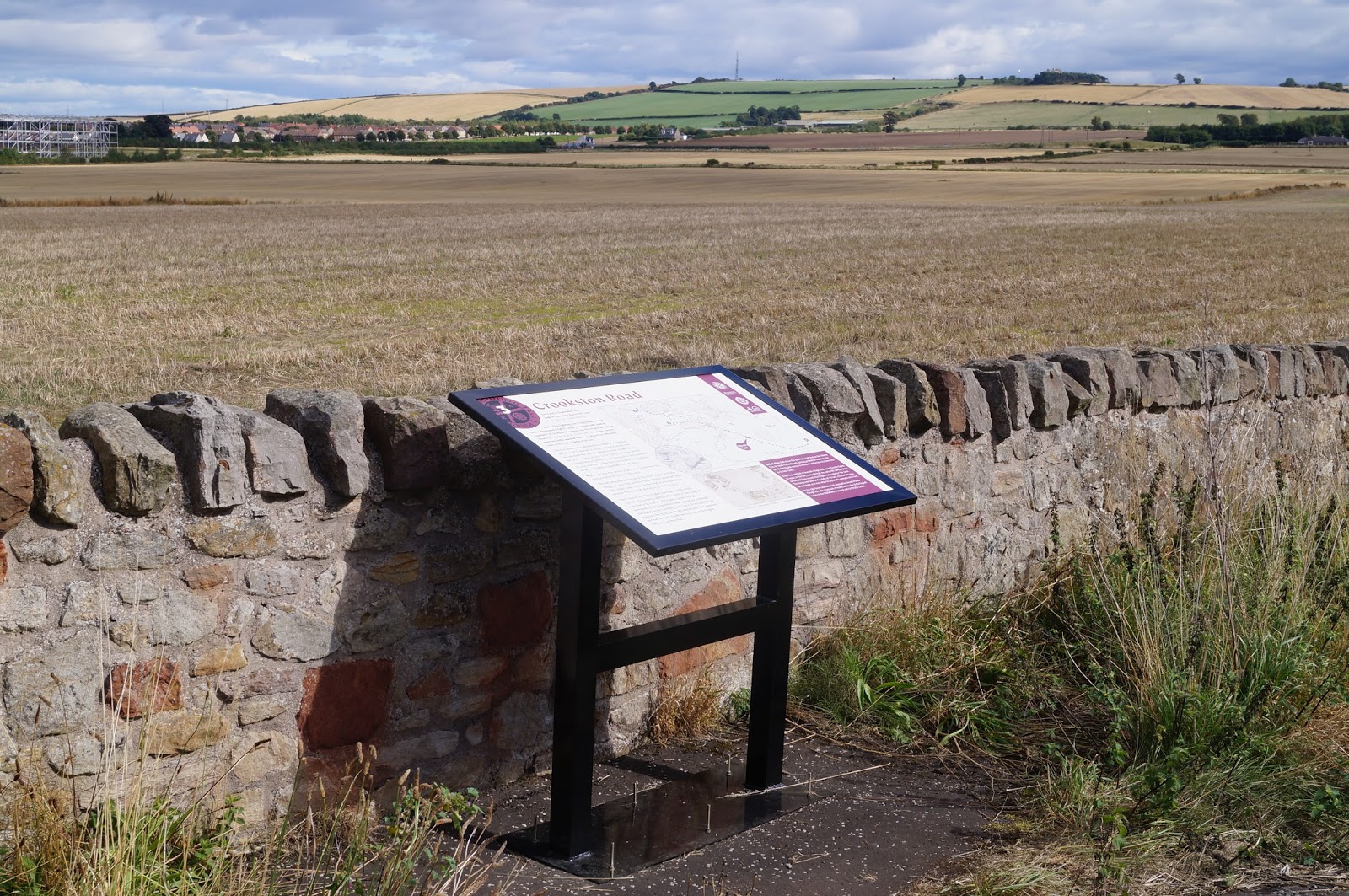 The third interpretation board on the Trail is located on the Crookston Road footpath, giving an overview of the still open fields where the main encounter of the battle took place. 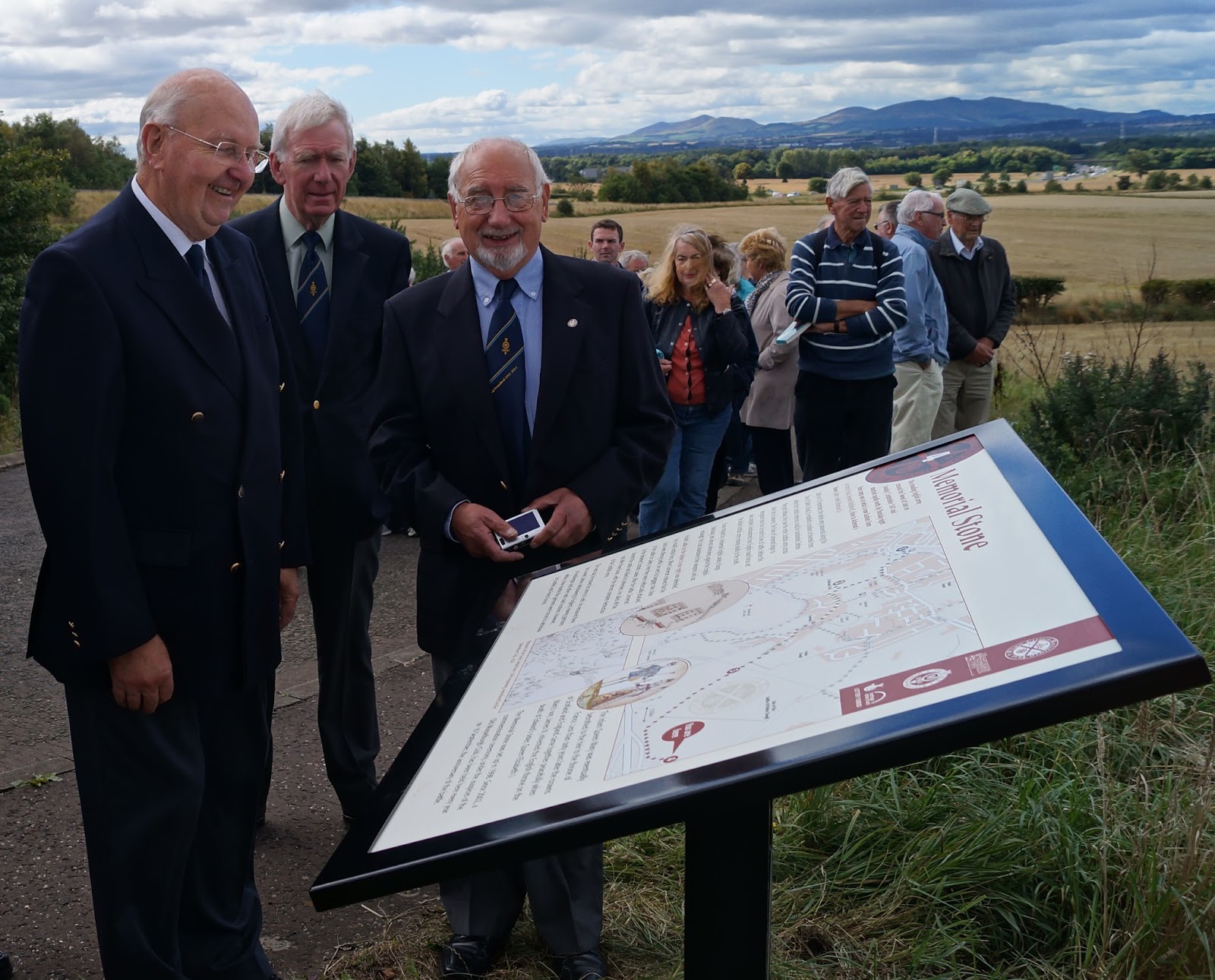 The battlefield walk concluded at the final location on the Trail, beside the Battlefield Memorial Stone, off Salter's Road.  In this picture, members of the Old Musselburgh Club are viewing the fourth board on the Trail. 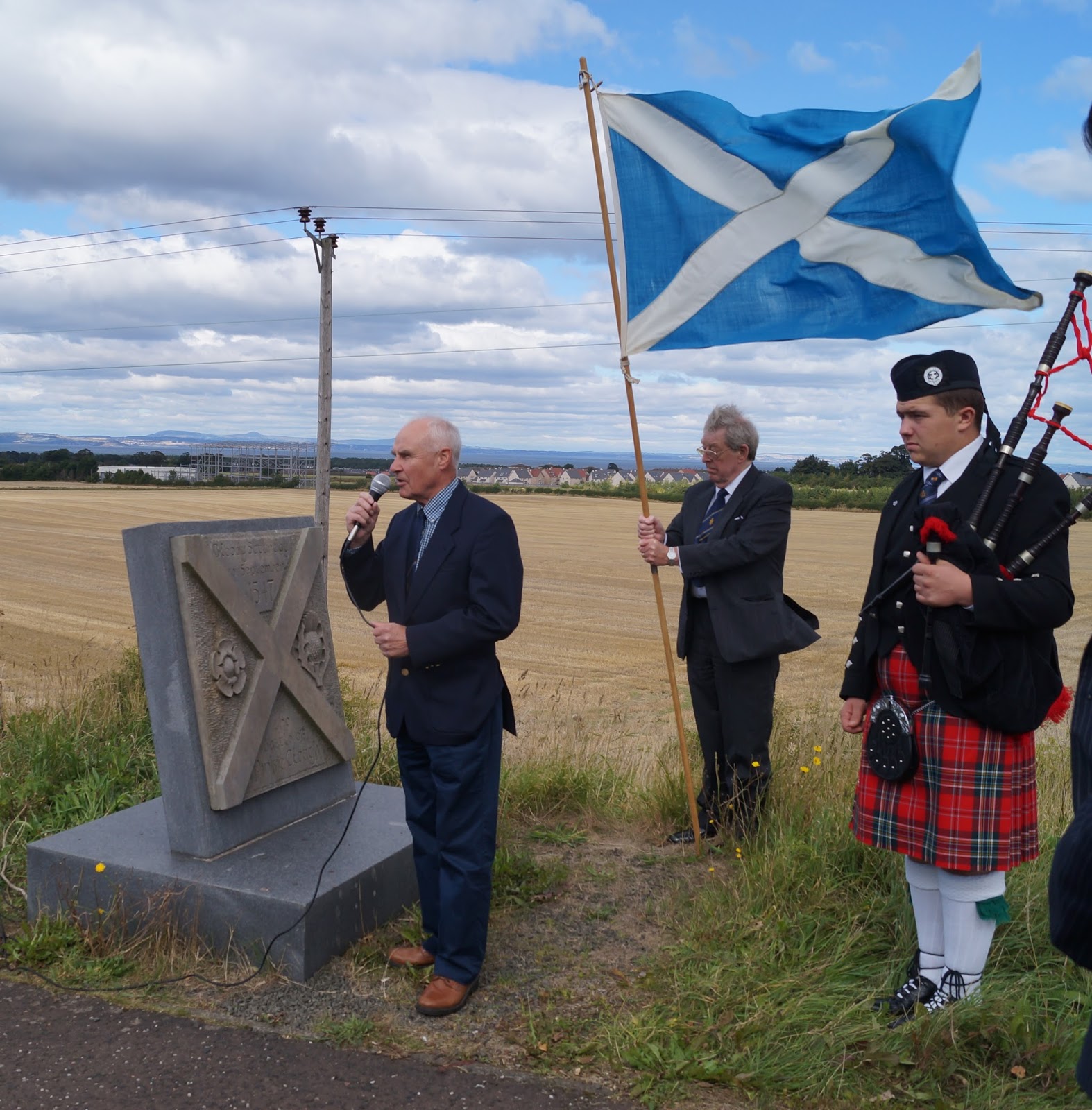 Alister Hadden, the President of the Old Musselburgh Club, together with Alastair Hare, leading the annual comemmoration ceremony for this historic battle.
Posted by Frank Waring at 12:41 1 comment:

The new Exhibition in the Musselburgh Museum is open to the public from today. 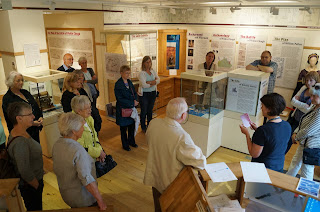 Exhibits include copies and reproductions of contemporary eye-witness accounts and images, archaeological artefacts, and models of the battle terrain, weapons and equipment. 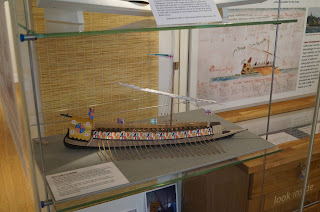 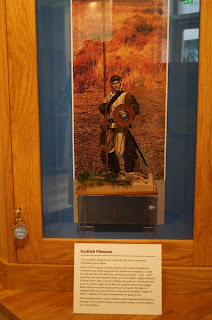 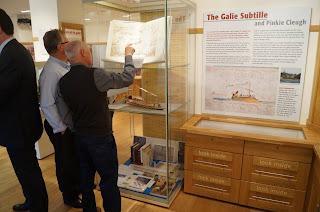 Posted by Frank Waring at 08:25 No comments:


Musselburgh Museum will re-open on 29 August with a new exhibition entitled ‘The Battle of Pinkie Cleugh: Then & Now’. The display is being set up by Pinkie Cleugh Battlefield Group in connection with the new Battlefield Trail, which is expected to be open in time for the annual commemoration of the battle on 10 September.

The Battle of Pinkie Cleugh, which took place in the open country between Inveresk and Wallyford, was the biggest and bloodiest battle ever fought in Scotland. It occurred in 1547, and was the last battle between the separate kingdoms of Scotland and England. Pinkie Cleugh marked the culmination of Henry VIII’s effort, later called the ‘Rough Wooing’, to coerce marriage between the two child sovereigns, Edward VI of England and Mary, Queen of Scots. The immediate outcome of the fighting was a disastrous defeat for the Scots – more than 10,000 of whom were killed, compared with a few hundred English dead. But when the war ended three years later, Scotland remained free of English power – and Mary, in due time, married the King of France. The two British kingdoms were peacefully united when Mary’s son James VI inherited the English throne from Elizabeth I, in 1603.

Roger Knox, the Chairman of Pinkie Cleugh Battlefield Group, said:
‘Pinkie Cleugh was a decisive turning point in Scottish history, but it remains surprisingly little known. We hope that the four Battlefield Trail boards that we are putting in place will encourage the local community and others to visit the site of the battle, much of which can still be viewed as it was almost 500 years ago.’
‘Our idea behind the Exhibition is to use the accounts and images made by eyewitnesses of the battle, combined with modern archaeological studies, to show that you can still read the story of the battle in the landscape today.’

Items in the exhibition include a copy – loaned by the National Library of Scotland – of a book, published in London in 1548 by William Patten, with his day-by-day diary of the invasion expedition, and a large number of bullets and other battlefield artefacts recovered by archaeologists in recent years.

Patten’s work includes a series of woodcut plans of the battle, and there are images also in a remarkable – but rarely seen – ‘roll map’ from the Bodleian Library’s collection, which is reproduced in the show at full scale. The painting is thought to be a copy, or more likely the artist’s preparatory sketch, for a ceremonial painting honouring the Duke of Somerset. It may have been intended for display in the Duke’s new palace beside the Thames, which was then nearing completion. The image constitutes a strip-cartoon, covering five scenes from the conflict over three successive days. The artist has included significant mapping detail from the coastal strip between Prestonpans and Leith, and there is a detailed perspective view of Leith itself, viewed from just offshore.


Also on display will be models of the battlefield terrain – and of the English warship, known as the ‘Subtle Galley’, which fired the opening shots in the battle. Costumes from the successful Queen Margaret University community drama about the battle will be on show. A further staging of the play is scheduled for 26 September in the Brunton Hall, Musselburgh.

From 29 August, the Exhibition will be open in Musselburgh Museum – in Musselburgh High Street, near the Tolbooth – on Thursday to Saturday from10:30 am to 4 pm.

The annual commemoration of the battle by the Old Musselburgh Club will be held on 10 September at 1pm at the Memorial Stone site off Salter’s Road at the A1 junction.